The Tonight Show premiered on NBC in 1954 with Steve Allen as its first host. While it maintained a distinctive format and style throughout its first four decades on the air, The Tonight Show changed significantly with each successive host.

Steve Allen, Ernie Kovacs, Jack Paar, Johnny Carson, and Jay Leno each took The Tonight Show in a significant new direction. Each of these hosts imprinted the show with distinctive personalities and management styles. 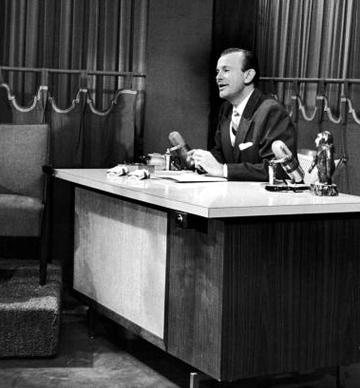 Jack Paar (pictured at right) dramatically quit the show live on air in 1960 after a risqué joke of his was pulled from the show without his knowledge.

“I’ve been up 30 hours without an ounce of sleep wrestling with my conscience all day. I’ve made a decision about what I’m going to do. I’m leaving The Tonight Show. There must be a better living than this”.

He then stormed off, leaving his flustered sidekick to broadcast to a nation of millions. Within a month Paar was back with his tail between his legs.

The contrast between Jack Paar and Johnny Carson was marked. Paar was emotional and likely to blow up – Carson was calm and unflappable. Unlike Paar, Carson tended to avoid anything controversial and was usually content to keep his audience amused.

Carson opened each of his NBC shows with a monologue and then spent most of the remainder of the evening simply chatting with guests – it was like having friends over to your place for coffee (albeit very famous friends!).

For millions of Americans, the show was a comforting, consistent, comedic lullaby. Every night for three decades, they’d drift off to sleep as a twinkle-eyed, silver-haired Nebraskan swung an invisible golf club, made some alimony jokes, and inspired throaty ho-ho-ho’s from his eager sidekick.

Over the course of some 4,500 shows, Carson turned The Tonight Show into a pre-sleep ritual, launched a thousand stand-up careers, and reached the kind of fame where last names were unnecessary: “Heeeeere’s Johnny!” was enough. 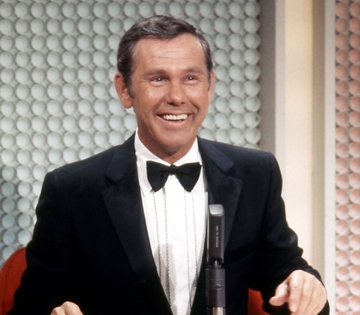 The Carson show originated from New York and was taped on the same evening that it aired. Johnny was on air all five nights a week and began his monologue when the show began, at 11:15 P.M.

On his very first show, Carson was introduced by Groucho Marx; Johnny’s first words, reacting to applause as he walked onstage for the first time were, “Boy, you would think it was Vice President Nixon”.

In February 1965 Johnny refused to do the 11:15-11:30 P.M. segment any longer, leaving that to Ed McMahon and Skitch Henderson. On 2 January 1967, this first fifteen minutes was dropped from the show altogether, leaving the show at 90 minutes.

The show would remain at 90 minutes in length until 1980 when it was further cut back to only one hour. Features that were used on his show with varying frequency included “Stump the Band,” in which members of the studio audience would  ask the band to try to play obscure songs by giving them only the titles; “Carnac the Magnificent,” with Carson as an inept magician; “Aunt Blabby,” with Carson as a gossiping little old lady; “The Mighty Carson Art Players,” spoofing movies, commercials, TV shows, and events in the news; “Floyd R. Turbo,” with Carson as a super-patriot; and “The Art Fern Tea Time Movie,” with Carol Wayne as the original “Matinee Lady.”

Perhaps the most celebrated telecast, and certainly the one with the most enormous audience, was that of 17 December 1969, on which Tiny Tim married Miss Vicki (pictured below). 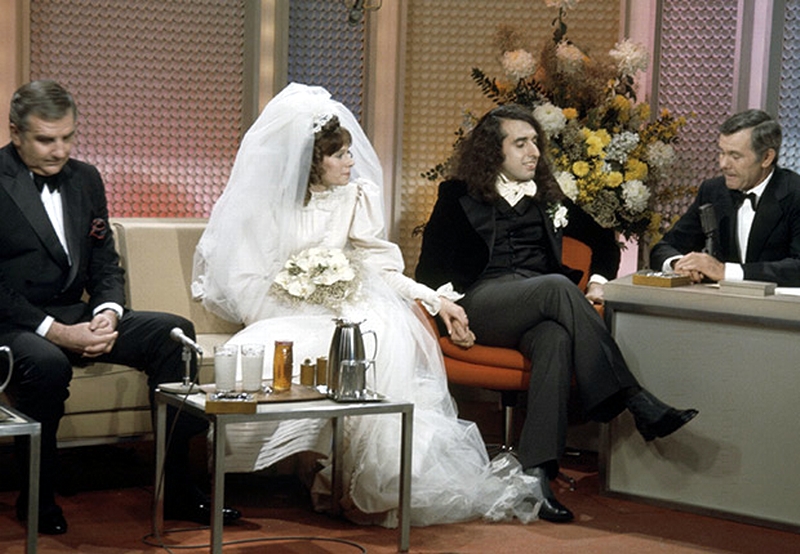 In May 1972 the show was moved permanently from New York to Burbank, California. It was also around this time that Carson started cutting back on his appearances. He would now do the show only four nights per week, leaving the Monday night show to a guest host.

The Tonight Show reverted to various guest hosts after Joan left, with Jay Leno the most frequent.

Leno then became the exclusive guest host in the fall of 1987, a position he held for the remainder of Johnny’s reign. 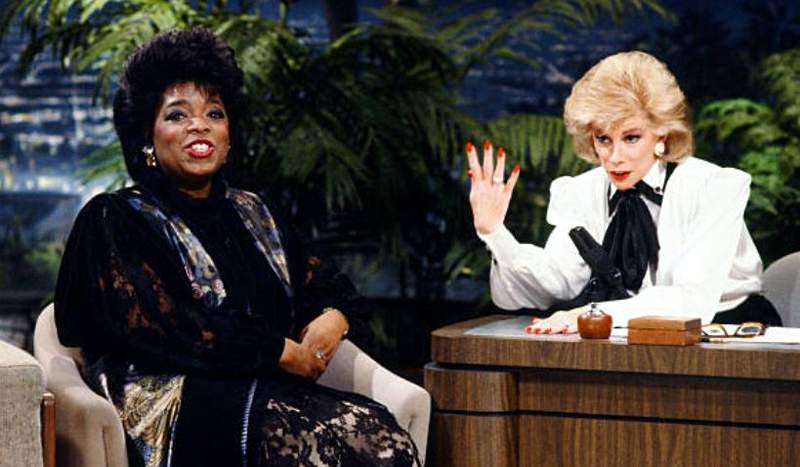 A typical Carson moment occurred on 16 October 1987. Carson always took a special delight in people with eccentric hobbies, and on this night he had a guest named Myrtle Young from Fort Wayne, Indiana, whose hobby was collecting potato chips that looked like other objects – an angry dog, a sleeping bird, a candle . . .

While Myrtle proudly showed off her fine (and fragile) collection, Ed McMahon distracted her momentarily and as she was turned away there was a resounding “crunch” from Carson. All eyes turned to the host who has just bitten into a potato chip!

Myrtle is in a state of shock, clutching her chest with her mouth agape and her eyes wide with shock and betrayal. How could Johnny munch one of her works of art?!? 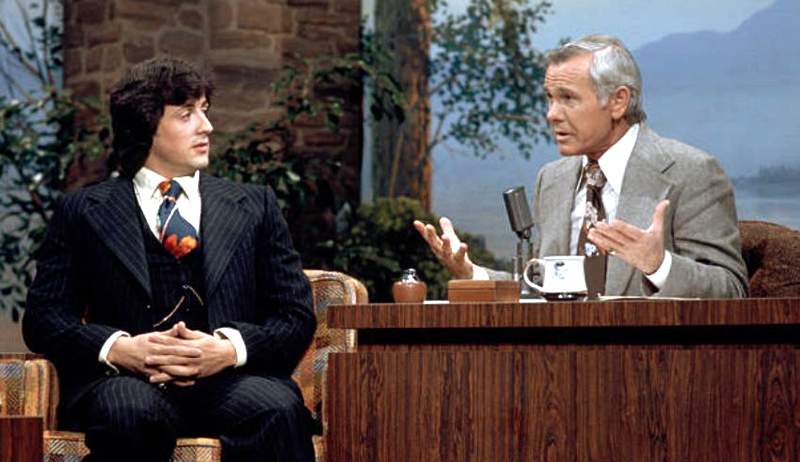 Ever the grand-master of timing, Carson allowed the gag to play out for a while before assuring Myrtle and reaching down to hold up a big bowl of chips he had behind his desk in preparation for the prank.

The laughter went on for several minutes.

Johnny’s final telecast (22 May 1992) was a national event. A quiet reflection of the shows golden moments over the past 30 years. An estimated 55 million viewers watched him hand over the Tonight Show host duties to comic Jay Leno.

Carson told the audience: “And so it has come to this. I am one of the lucky people in the world. I found something that I always wanted to do and I have enjoyed every single minute of it.”

NBC’s decision to hire Leno did not sit well with David Letterman who had also coveted the Tonight Show job. Industry insiders guessed that Letterman would soon take his sarcastic sense of humour to another network. He moved to CBS in 1993 to go head to head with Tonight with Jay Leno.

In 2002 Carson, who often smoked during his show, was diagnosed with emphysema – a respiratory disease associated with smoking. He died in 2005 at the age of 79, after losing a battle with the disease.