This female punk-pop quartet formed in Birmingham in 1985 and were originally known as We’ve Got A Fuzzbox And We’re Gonna Use It.

Led by vocalist Vix (Vickie Perks), they were loud, gaudy and mildly controversial both visually and aurally, with a wilful raw amateurishness to their playing.

They received an early career boost via inclusion on the now legendary NME C-86 sampler tape, and their debut EP, Rules and Regulations (containing the songs XX Sex, Do I Want To, She and the title track) hovered just outside the Top 40.

Their schoolgirl playfulness and frequently-voiced disregard for musical precision extracted a condescending chauvinism from the musical press of the period.

An appearance on their record label’s Vindaloo Summer Special spawned a minor hit EP, Rockin’ With Rita (1986), and a contract with WEA followed.

In 1986, they scored another small UK hit with the glorious Love Is The Slug, with its distinctive wall of sound, embellished by piercing and barely coherent vocals. 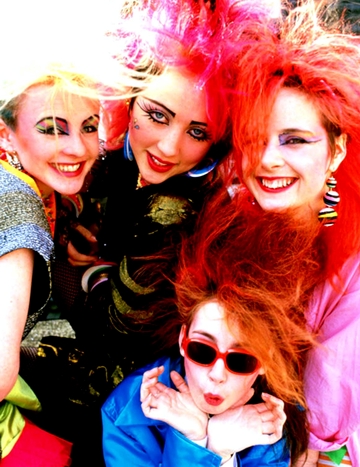 After further touring, the group returned without their bizarre hairstyles, sleek and transformed after having honed a more commercial sound for the album Big Bang (1989).

Vix emerged as a goddess in a blue PVC dress who liked to simulate pleasuring herself with the microphone stand (they famously defended their reinvention by asserting that every band in history had sold themselves with sex “except Marillion“).

The new improved Fuzzbox even had a few hits, such as the exuberantly silly Pink Sunshine (1989) and the Gerry Anderson homage International Rescue (1989) – which saw the band dressed as Thunderbirds puppets with Vickie playing the role of Jane Fonda’s Barbarella, complete with bacofoil space garb – but they split up in 1990 when Vickie left for a solo career.

Maggie Dunne joined Babes In Toyland as bassist. Vickie reappeared as Vix Fuzzbox and worked in drama and dance as well as collaborating with Glenn Tilbrook of Squeeze and Hugh Cornwell of The Stranglers.

Jo Dunne (born 1969) passed away in October 2012 after a shockingly short battle with cancer.

A quintet from Hastings, England, The Teenbeats were one of the better bands on Britain's late '70s mod revival scene, with Huggy Leaver (vocals), Ken Copsey...

AC/DC lead vocalist Brian Johnson trod the boards in the 1970s with Newcastle-based Geordie. The band who were often referred to as 'Newcastle's answer to...

The 1966 UK #1 single Winchester Cathedral was actually recorded by a group of studio musicians assembled by writer, producer and lead singer Geoff Stephens. When...

Although not strictly a mod band, Fast Cars' earliest gigs were at the Sydney (Australia) mod revival headquarters, the Sussex Hotel. In 1981, Martin Plaza...