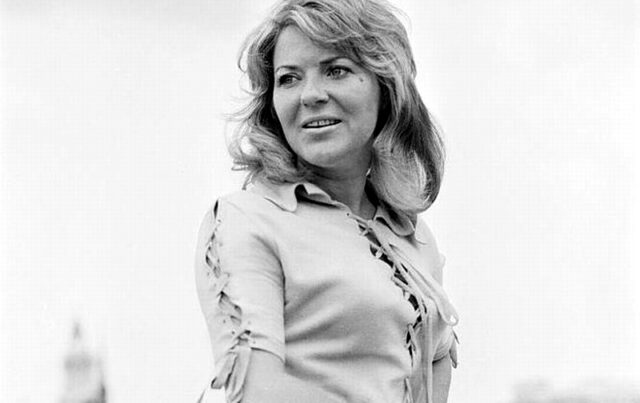 Jackie Lee was born Jacqueline Norah Flood on 29 May 1936 in Clontarf, Dublin (Ireland).

As a child, she won a scholarship and trained as a soprano for four years. Upon finishing her studies she became a vocalist with the top Irish showbands.

Moving to London she joined the popular dance band The Squadronaires and began releasing solo records in 1955.

From 1959 to 1964, Lee was a member of The Raindrops, a successful quartet who made countless appearances on British TV and variety shows, had a BBC Radio show and released a string of records.

She also enjoyed a successful career as a respected session singer, providing backing vocals for such global hits as Green Green Grass of Home by Tom Jones and Release Me by Englebert Humperdink.

In 1968 she enjoyed a big hit with White Horses – which was written for a popular children’s TV series and which she recorded and released under the name ‘Jacky’. Two years later she was asked to record the theme for a new children’s TV series called Rupert Bear (adapted from the popular Daily Express comic strip).

The song was written by her ex and now late husband Len Beadle (aka Frank Weston) and lyricist Ron Roker.

She retired from singing shortly afterwards due to vocal complications and throat problems and moved to live in Canada.

The Aliens were one of the first Australian bands of the late 70s to adopt the New Wave "uniform" of black clothes and skinny ties. Originally known as Riff Raff, The Aliens' hailed from Adelaide and played...

Sheena Shirley Orr was born in 1959 in Bellshill, Scotland, and began performing while studying speech and drama at the Royal Scottish Academy of Music And Drama, studying by day and singing with a band...

Based in Sacramento, California, Game Theory made their recording debut in 1982. Although loosely associated with the 'paisley underground' movement the band's progress was determined by their vocalist and guitarist Scott Miller's infatuation with classic American...

On 14 September 1968, The Archie Show, a Saturday morning TV cartoon show, made its debut on CBS in America. The show was a Don Kirshner creation based on a high school rock band in a popular...

1 9 5 6 - Current (Europe) It has been called “a monument to drivel” but the annual show has topped television ratings since the first contest was held in Switzerland in 1956. The Eurovision Song Contest is a...

Formed in 1970 around Sandy Denny and future husband Trevor Lucas, Fotheringay barely lasted a year. The band set to work, rehearsing in Sandy's Fulham flat in a sound-proofed room. When they finally hit the road, they deliberately...