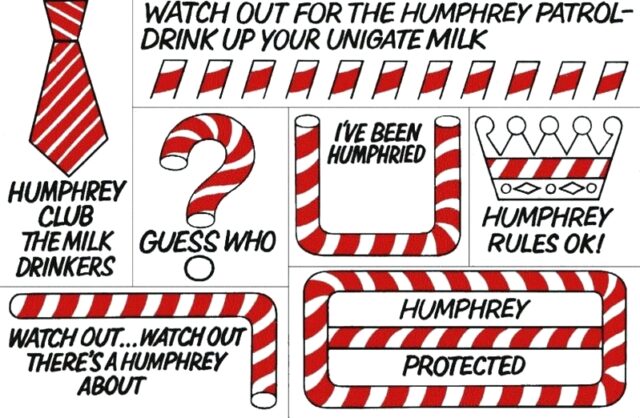 “Watch out, there’s a Humphrey about” was a slogan which first hit British televisions in 1974.

The Humphrey’s (a product of Unigate designed to make us drink more milk during the mid 70s) were invisible creatures who sucked milk from bottles left on doorsteps through red striped straws.

The TV ads consisted of giant red and white stripy straws appearing from nowhere in order to pinch your milk. Many toddlers were truly terrified of the Humphrey ads, and would hide behind the sofa in a Dalek-frenzy.

Several celebrities appeared on the TV ads, including Sid James, Rod Hull & Emu, and Arthur Mullard. To this day many of these people still get a chill when they see Arthur Mullard on TV.

There has always been fast food of sorts, but 1950s America put mass-produced, flavour-rich but nutritionally-poor fast food on the culinary map. It was the decade that quick-service restaurant chains began to open and franchise,...

There was a really jolly period during the 70s before everyone figured out how bad drugs really were for you and got all 12-step and "Just say No!" about it. MARIJUANA The 'lid' was fading into the...

"The Talkboy" was originally a cassette recorder and non-working prop designed and built for the 1992 blockbuster Christmas film Home Alone 2: Lost in New York. Following the success of the film, an American company called...