“Hollywood Madam” Heidi Fleiss was arrested in Los Angeles in 1993 for running a high-priced call-girl ring. Actor Charlie Sheen was known to be one of her many showbiz clients.

Heidi was one of six children born to Paul Fleiss, a popular Los Feliz paediatrician. In 1987 aged 22, Heidi was taken under the wing of Madam Alex, a procuress to the stars, to whom Fleiss was introduced by her filmmaker boyfriend.

She first worked as one of Alex’s call girls but quickly absorbed the business and launched her own prostitution service in 1990. With a knack for recruiting high-end talent, by 1991 Fleiss had amassed a stable of 500 girls who charged clients $1500 a night, of which Fleiss took 40 per cent. 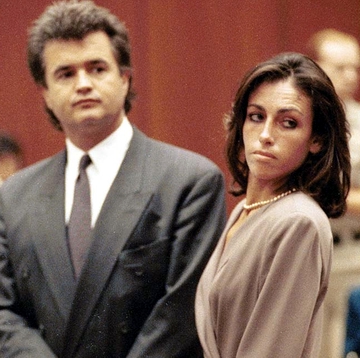 She was soon clearing $300,000 a week as she kept an A-list roster of celebrities and Hollywood executives very satisfied.

On 9 June 1993, Fleiss was arrested and charged with five counts of pandering. The case went to trial – where Charlie Sheen testified he had spent $53,000 a year on Fleiss’ services.

A jury convicted her on three counts, for which she received a three-year sentence. The conviction was overturned in 1996, but a federal tax-evasion case the next year led to a 20-month stint in prison in Dublin, California.

Her infamous ‘black book’ containing the names of her famous clients was actually a 28-page red Gucci planner.