Launched in 1958 by Minimodels, Scalextric promised to “bring the excitement of motor racing right into your home where children and adults alike can enjoy the thrill of the race”. The advertisements also claimed that “the cars travel at a scale speed of 130 mph on the straight” – yeh, right.

Invented by a Mr B Francis, they were a range of metal-bodied cars containing a unique clockwork motor, released under the trademark Scalex. The popularity of the mini-models waned around 1956 and Francis began searching for new ways to update the product.

He redesigned the cars to include an electric motor, devising a rubber-based road surface with parallel grooves in which metal rails carried an electric current enabling the cars to motor around the track.

Developments in the late Fifties led to a new product, Scalextric, being launched at the Harrogate Toy Fair in January 1957. Success was immediate and further developments by 1964 led to the slogan “the most complete model motor racing system in the world”.

The appeal of the racing cars really took off when Formula 1 driver Jim Clark promoted the product and the first Scalextric World Championship was staged in London. 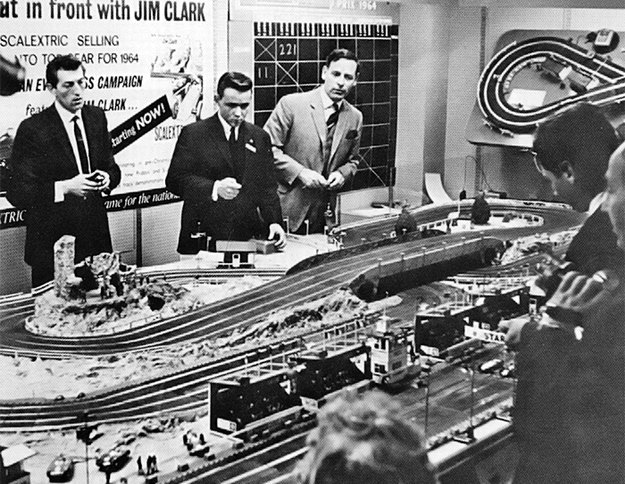 Putting the Scalextric set up was almost as much fun as playing with it – you had to spend four hours setting the thing up, and then had to spend an hour disassembling the thing because you couldn’t work out which part of it wasn’t working . . .

And then you would spend another hour putting it back together, and then it still wouldn’t work, because the absurdly flimsy power connectors were bent, or the “brushes” on the bottom of the cars had frayed, or the thing was just a poorly put together piece of @*%!.

Invariably, with the exception of the electricity-free Hot Wheels, any toy racing car set would be played with approximately once, and then put into a high cupboard.

The reason for this was usually a combination of the hassle it took to set up, and/or a disgruntled parent exclaiming “I don’t want that thing cluttering up the living room”. Then why did you buy it for us, idiot?

Within weeks, the controllers would find use as guns in some impromptu backyard war game, and the cars – track remaining safely in the box – would be forced along the carpet, or thrown against skirting boards in order to simulate traffic accidents.

An early-70s look stolen from the gaucho (the traditional cowboy of Argentina), these wide-legged short trousers were the hottest things to wear with your Dingo boots. Gauchos (the trews, not the cowboys) had very wide legs,...

Originally made by the American Aerosol Company in 1965, the "fun foam soap" delighted kids with pop culture character designs such as Popeye, Spider-Man and The Hulk on its cans and concerned parents with its...

Since television licenses first appeared in the UK, the TV Detector Man has been a ghoulish spectre who can allegedly track down telly-watchers by means of a revolving thingamy-wotsit on top of his detection van....

When the transistor replaced the bulky and unreliable vacuum tube in amplification units, transistors did the job better and were much smaller, making it possible to drastically reduce the size of radios and record players. Transistors...