Created by prolific patent-holder and NASA scientist Lonnie Johnson in his basement during spare evening hours in 1982, this revolution in water gun culture was actually born out of Johnson’s attempts at creating a new kind of cooling pump technology for refrigerators and air conditioning units that used water instead of Freon.

He shopped around the humble prototype – a hodgepodge built out of a two-litre soda bottle, plexiglass and PVC pipe – for several years until finally catching a break with promising toy company Larami.

When it officially launched in 1990, the Super Soaker didn’t bear the now-recognisable moniker, but instead, the less-appealing ‘Power Drencher’ label. But poor sales and a name conflict with another inventor led to a full rebranding and relaunch in 1991. 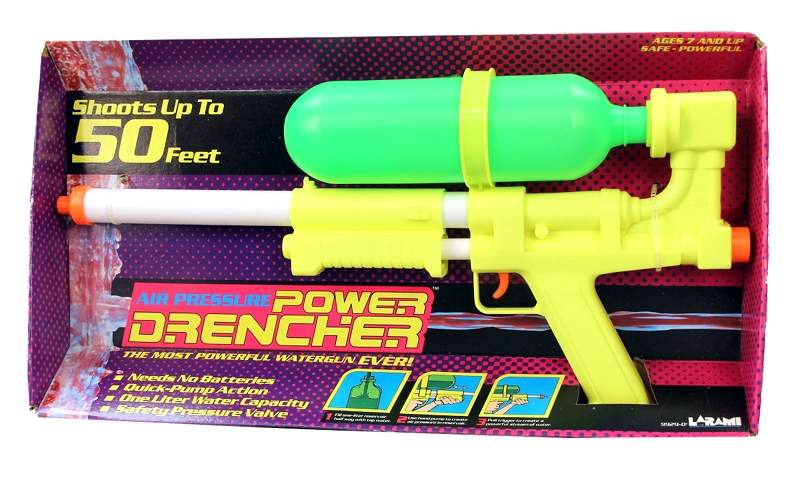 This, coupled with a memorable TV advertising campaign, resulted in more than two million Super Soakers being sold that year alone. Whether it was the line’s signature neon colours or the strong, reliable H2O tech, the new outdoor play device was a massive hit.

Some of the first Super Soaker water guns released were the SS30 (orange and yellow), the SS100 (blue and yellow) and the bestselling SS50 (yellow and green). It was this last model that earned Super Soaker an official nomination for the National Toy Hall of Fame.

With the introduction of Larami’s CPS (Constant Pressure System) in 1996 came the infamous CPS2000, a revered model that arguably remains the most powerful stock water gun to ever hit store shelves. It even came with its own health and safety warning: “Use with adult supervision. Do not shoot at anyone’s face or eyes”.

By Super Soaker’s 10th anniversary, more than 200 million guns had been sold, to the tune of $400 million in sales revenue.

Toy maker Hasbro absorbed Larami in 2002, but they continue to crank out new Super Soakers every year under the Nerf product line. Since their introduction over 20 years ago, there have been approximately 175 Super Soaker models released, giving kids and adults alike a variety of ways to wage watery warfare.