He joined The Motors in 1977 and was relegated to mere sideman status by the nucleus of the band, songwriters Andy McMaster and Nick Garvey.

While waiting on pre-production work for the second Motors album, Tchaikovsky took the opportunity to do some recording of his own. 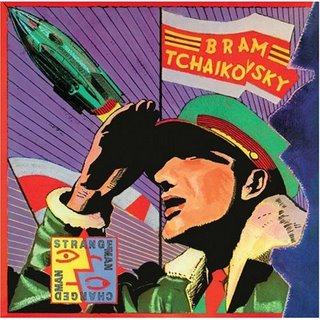 The resulting single, Sarah Smiles, drew enough interest for him to leave The Motors and form his own band, initially called Bram Tchaikovsky’s Battleaxe.

In addition to its leader, the band Bram Tchaikovsky consisted of Micky Broadbent (bass, keyboards) and Keith Boyce (drums). They signed to the new Radar label in 1978 along with Stiff expatriates Nick Lowe and Elvis Costello. A second guitarist, Dennis Forbes, was subsequently added.

The band showed a great deal of promise with their first album Strange Man Changed Man (1979), fitting in nicely with the growing power pop movement. The unforgettable Girl of My Dreams, a true high point of the time, became a minor hit on both sides of the Atlantic.

Tchaikovsky continued on through rapid personnel changes for two more albums, The Russians Are Coming (1980) and Funland (1981).