The story of the ‘girl group’ sound, which reached its commercial and artistic peak in the early and mid-60s, is not just the story of the performers. More than any other style in rock & roll, it was the product of partnerships between the performers, songwriters, and producers.

The result was one of the most vital links between the birth of Rock & Roll and the British Invasion, the arrival of which gradually eroded the presence of girl groups on the charts even as it acknowledged enormous debts to the genre.

Girl groups were more polished than the early Rock & Roll pioneers, more innocent than the soul music that was originating at the same time, and as firmly planted in Tin Pan Alley as Rhythm & Blues. While it wasn’t the rawest or most artistically expressive pop music, few forms of rock were as affecting, romantic and tuneful.

They also provided the forums and mouthpieces for some of pop/rock’s most talented songwriting teams, as well as laying the foundation for ground-breaking orchestral production that lent an increased sophistication to rock & roll.

The Chantels, led by the heart-wrenching vocals of Arlene Smith, are generally acknowledged as the first girl group (Earlier female combo’s such as The Andrews Sisters were certainly groups of girls, but they were not ‘girl groups’). Their Top 30 hit Maybe (1958) had obvious roots in gospel and Doo-Wop, but also displayed yearning, innocent and vulnerable qualities not apparent in the male Doo-Wop outfits. 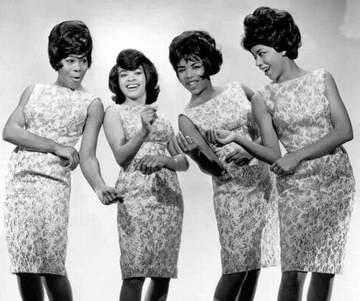 It was The Shirelles (pictured at right) from Passaic, New Jersey, who really established girl groups as a major force with their number one hit Will You Love Me Tomorrow? in 1960.

The Shirelles scored half a dozen Top 20 singles in the next couple of years and ranked as the most successful female vocal group of the era. The song was written by Gerry Goffin and Carole King, who would go on to write many girl group classics in the next few years. They were one of the hottest songwriting teams of the Brill Building sound.

Named after a complex of musical publishing offices on Broadway in New York, it also gave birth to the partnerships between Jeff Barry and Ellie Greenwich, and Barry Mann and Cynthia Weil. These teams were responsible for the lion’s share of the best girl group recordings. Less celebrated writers like Luther Dixon (who wrote several songs for The Shirelles) and a pre-Disco Van McCoy also contributed classics to the genre.

It took Phil Spector to launch the girl group sound to its pinnacle. The producer set material from the cream of the Brill Building crop (as well as his own compositions) to grandly majestic, orchestral arrangements that achieved an unheard-of density without sacrificing any of the music’s passion and melody. 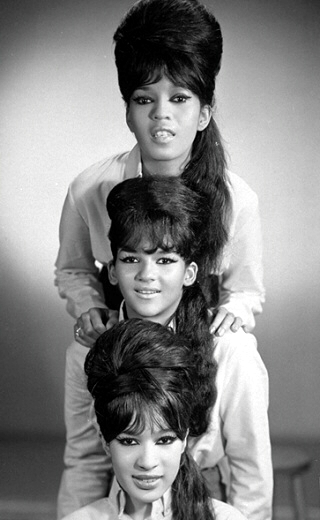 It was a carefully marketed package of teen angst. It had to be adorable but unthreatening. It had to be heartbroken but loyal. Most of all, it had to suffer . . . but never in silence.

The Crystals and The Ronettes (pictured at left) were the most talented pilots of Spector’s “wall of sound” productions, most of which were released on his own label, Philles.

While The Shirelles and Phil Spector‘s acts were the most prominent girl groups in the years preceding the British Invasion, the sound was emulated by several one or two-hit wonders, and less celebrated producers.

The Chiffons, The Cookies, and The Exciters all contributed timeless classics. And there were hundreds of worthy singles in the style that for one reason or another, didn’t become blockbusters, although they had most or all of the essential elements.

Most of the great girl groups were black, with clear affinities for R&B and Doo-Wop, but the most innocent qualities of the sound were projected on many records by white teen girl singers as well. Lesley Gore was the most renowned of these performers, who also included The Angels, The Raindrops and one-hit artists like The Murmaids.

While the arrival of The Beatles in 1964 is often thought of as the beginning of the end for the girl groups, the records were actually as successful as ever during that year. The rise of the Red Bird label, featuring The Dixie Cups and The Shangri-Las (pictured below), who both made it to #1 in 1964, did much to boost the genre’s commercial fortunes. Although the burgeoning Motown empire wasn’t heavily rooted in the girl group sound, 1964 saw the release of breakthrough discs by The Marvelettes, The Supremes and Martha & The Vandellas, that owed heavy debts to the style. Relying heavily on the production and songwriting talents of Smokey Robinson and Berry Gordy Jnr, their sound was nonetheless grittier and bluesier than the New York school.

There is no doubt that girl groups were among the British Invasion groups’ main influences. John Lennon once stated that he and Paul McCartney hoped to duplicate the success of Goffin and King with their songwriting partnership, and The Beatles‘ early albums included covers of hits by The Shirelles, The Cookies and The Marvelettes.

Several other British groups also made it big with cover versions of girl group hits (including The Searchers, Herman’s Hermits and Manfred Mann). But the most successful British groups (primarily The Beatles) were those that wrote their own material.

It was this shift in emphasis toward self-contained rock groups that played their own instruments that spelt the end of the girl group as a major force, although singers like Dusty Springfield, Sandie Shaw, Lulu and others continued to produce classic recordings in the girl group vein throughout the 60s.

The girl group sound, though, never really went away. In the case of many of the 80s New Wave bands, the influence was happily on display, as with The Bangles, Blondie and The Go-Go’s (and even The Ramones, despite being an all-male group). More subtly, you can hear its influence in many female recordings through to the present day.