Each card was set into a larger cardboard frame and bordered by perforations. The card could be punched from the perforation and, using the sticky back, applied to a flat surface. 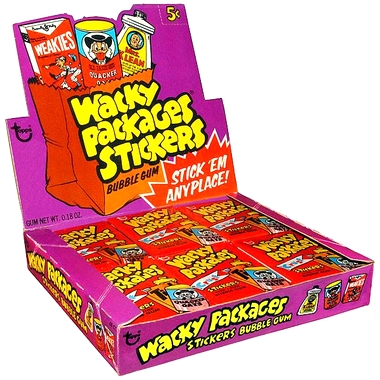 The perforations made the card difficult to remove without tearing the fragile paper surface, and as a result, Die-Cuts and Wacky Ads did not perform as well as Topps had hoped.

In 1973, Topps tried again with a new format. Instead of perforations, every image was on a self-adhesive sticker-back card. The new cards needed a new name, and Topps’ Wacky Packages were born.

Jay Lynch, a comics legend responsible for many of the Bazooka Joe cartoons, was also chiefly responsible for the art and concepts of Wacky Packages. Lynch claims the idea for Wacky Packages comes from ad parodies in Mad magazine and the New Yorker, and certainly the artwork was similar to that of Mad.

The 1967 series had not been particularly popular, but Wacky Packages ruled schoolyards, parks and recreation centres throughout the 1970s with an iron fist. The wildly popular and politically incorrect cards parodied everyday household products, most of which could be found at the supermarket.

Children, familiar with the idea of product art at a very early age, gravitated to the incredibly well-designed cards and stuck them on every surface they could find like little product-placement terrorists. There wasn’t any place safe from the ravages of Wacky Package stickers.

Most sets of Wacky Packages also doubled as a puzzle. Packages came with individual puzzle pieces which fit into a larger parody puzzle.

Of course, this required completing the set in order to put it together, assuring that children would continue to buy them with maniacal devotion.

The task got a little easier in 1979 when Topps’ reprint series included the puzzle pieces on the backs of every card.

All kinds of brand name products got the Wacky treatment: Miss Clairol, Crest Toothpaste, Lavoris, Lipton Soup, Scope . . . No product or company was above being lambasted. 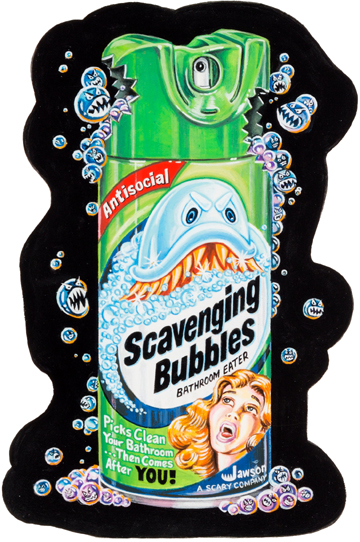 In 1982, Tetley Tea Bags took Topps to court claiming that the Wacky Packages’ parody of their product, “Petley Flea Bags”, had done damage to their brand. They didn’t win, but the writing (or sticker) was on the wall.

Although Wacky Packages had enjoyed ludicrous popularity, it was time for Topps to throw in the towel. The children that had grown up on Wacky Packages were now actually growing beyond them.

Besides, there were virtually no companies left worth parodying. Between 1985 and 1991, there were four attempts at reviving the Wacky Packages brand, but with little success.

The original 16 series of Packages produced between 1973 and 1977 are heavily collected and traded to this day. The popular series yielded several competitors in the 1970s and later inspired such sets as the Garbage Pail Kids. Now Wacky Packages exist as a talisman of a 1970s childhood.

One look at them can make the adults who owned them go misty-eyed with nostalgic visions of summers spent slapping stickers on taboo surfaces and making their first lasting impressions on the world around them.

The main job of British movie dolly birds in the 60s and 70s was to be passive objects for the likes of Sid James or Robin Askwith to "phwooaar" all over or to scream helplessly...

The United States Army utilised the beige cotton twill material for its uniforms, which were made in China. The shipping boxes were stamped "China" but were misread as "Chino" which was interpreted as the name of...

With all due respect to astronauts and other childhood idols, the 1960s belonged to the secret agent. The adventures of James Bond, Matt Helm and Derek Flint dominated cinemas, while television screens overflowed with the...

Angela - the gold cursive script dangled from a dainty gold chain and nestled in the tanned hollow between her collar bones. Jayne - the letters sparkled in the bright rays of the sun, shining like the blonde...