The Amural Products Company of Naperville, Illinois, released nine series of Chu-Bops between 1980 and 1983. The first series they produced, consisted of eight different rock and soul album covers by assorted artists including The Knack, Pat Benatar, Billy Joel, Rush, The Spinners and ABBA. The albums cost 29 cents each.

Each miniature album had the picture of a large-sized LP on the front and a song lyric (usually the biggest hit) printed on the back side.

Once opened, each “Bop album” included the lyrics to a hit song and pictures of the artist.

Later in the product’s run (which totalled 85), the company went with mostly one big name, highlighting Elvis Presley (Series 6), The Beatles (Series 8) and The Rolling Stones (Series 9). Most series’ contained eight albums. The Beatles was the largest series, with 16 titles.

Related items could be purchased through a mail-in offer: collector albums to house the mini records (originally $2 each), T-shirts ($6 each) and “a cleverly disguised beautifully detailed AM radio scaled exactly to Chu-Bops mini-album size” ($22). 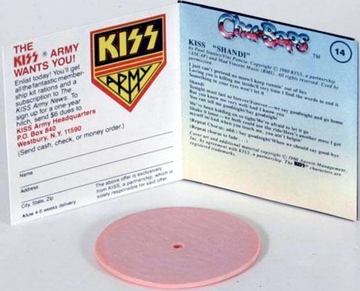 Mainly an American product, Amurol did test market a smaller number of Chu-Bop titles in Europe and Japan, where they were sometimes marketed as ‘Hit Pops’ and ‘Chu-Pops’.

Some people ate the gum and threw away the cover, some had the insight to hold on to them in their original shrink-wrapped condition.