A simple cotton handkerchief, or sometimes just a crude cut of cloth, the bandana first became associated with the Old West. The cloth neckerchief was worn around necks, pulled up to cover the mouth and nose as a protection against the dirt and dust of the uncivilised western frontier.

But when outlaws or bandits began wearing their neckerchiefs pulled up to conceal their identity when they stirred up trouble, the bandana got a bad rap.

During the 80s, the bandana got a facelift, and gone were the old-fashioned western print colours. In their place came band logos and ninja symbols.

What 80s teen didn’t have a room plastered full of bandanas emblazoned with Ozzy, Pink Floyd, or Def Leppard? No longer was the bandana hidden in pockets during the heavy metal 80s.

If a bandana wasn’t rolled and wrapped around your neck, it was wrapped around the head to keep the sun from burning your freshly-shaved head, or tied across your forehead in your best Loverboy impression.

Girls followed Punky Brewster‘s lead, wrapping a rolled-up bandana around their wrists or ankles – and here, one just wasn’t enough.

Layer them up like your double slouch socks, match them to your different colour hi-tops, or wear them as bracelets and necklaces. Nothing was cooler than a coloured bandana wrapped around the thigh of your acid-washed jeans.

Handkerchiefs took a violent turn when inner-city gangs adopted ‘colours’, most often displayed by a coloured bandana wrapped around their heads.

The simple bandana that has always been the staple of hardworking, honest men, and the occasional western outlaw, now became the sign of territory and bloodshed.

It was an ugly turn to an old favourite, but no other cloth has had such a varied and exciting history as the simple square bandana.

Peter Alexander Edwin Meaden was born on 11 November 1941. As a teenager, he worked in a restaurant before embracing the mod subculture and establishing himself as a "face" on the scene. After spotting a young band...

The first British Car-Sleeper Limited train ran between London and Perth in June 1955, as a development of an existing overnight train. Over the next six years, dedicated motorists-only trains were quickly introduced on many... 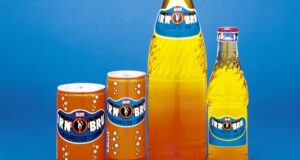 Such is the remarkable popularity of Irn-Bru in its native Scotland that it's the single biggest selling soft drink and it outsells both Coca-Cola and Pepsi. In the 1980s, the drink’s tagline was “Made in Scotland...

Before there was Atari, before there was even Pong, there was the Odyssey. We take it for granted now, of course, but try to remember there was once a time when nobody even thought about...