The key to successful surgery is a steady hand. Of course, it is also handy to have a patient whose nose lights up red when you take out the wrong kidney. 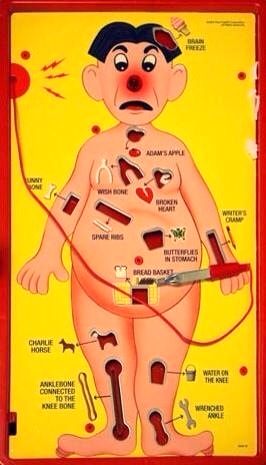 That’s exactly what happened when you made a surgical faux pas in this Milton Bradley game, which featured a mock operation involving tiny plastic organs.

The board was an operating table with a bloke called Cavity Sam drawn on it, with holes cut in his body containing various plastic organs.

Each player would take a turn at extracting an organ with a pair of tweezers – if they touched the edge of the cavity the chap’s nose would light up and a buzzer would sound (representative of the malpractice lawsuit which would doubtlessly follow in real life).

Sadly, the organs were easily lost (or swallowed) and eventually so many went missing that Operation became like playing poker with only ten cards in the deck.