In an ordinary street in the East ’40s in New York stood Del Florio’s tailor shop. But if you passed through the shop – something you could only do if your credentials were right – you would find yourself in the headquarters of the world’s most extraordinary crime and spy-fighting organisation: the United Network Command for Law Enforcement.

U.N.C.L.E – as this body was affectionately known – existed to protect the people of the world from all forms of disruption, terror and exploration. Most commonly – but not always – its adversary was a sinister worldwide conspiracy known as THRUSH. 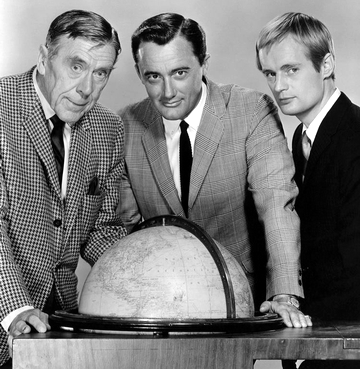 THRUSH was a secret society of mad scientists, megalomaniac industrialists and corrupt government officials who believed that because of their superior intelligence, wealth and position, they were entitled to rule the world.

In the innermost sanctum of U.N.C.L.E headquarters sat the chief – “Number One” – an amiable, rather untidy Englishman called Mr Waverly (Leo G. Carroll) who directed a corps of secret agents whose most prominent members were a suave American called Napoleon Solo (Robert Vaughn) and a blonde, introverted Russian called Illya Kuryakin (David McCallum).

Solo (badge #11) was the Chief Enforcement Agent and concentrated on ferreting out evil-doers who plotted fiendish deeds on a grand scale. He and Kuryakin (badge #2). spent most of their time saving the world and as the series wore on the plots became more far-fetched.

Underneath the U.N.C.L.E offices was a subterranean channel leading to the river, with a fleet of fast motor launches ready for any emergency, and on the roof was an ever-active assembly of high-powered shortwave transmitters and receivers.

There were six sections of personnel, each subdivided into two departments, one of which overlapped the functions of the department just below it. The topmost was Policy and Operations. Nobody knew how its leaders entered or left their offices. 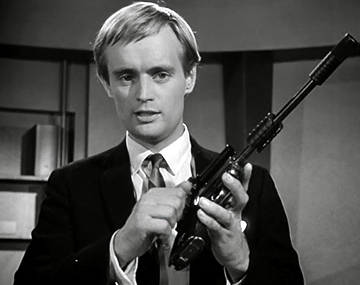 A number of prominent actors and actresses guest starred each week as either villains or innocent bystanders, including Joan Crawford, Kurt Russell, William Shatner, Leonard Nimoy and Sonny and Cher.

At its peak, The Man From U.N.C.L.E.  was shown in 60 countries and consistently ranked in the Top 10 programmes on US television. Eight feature films were made from two-part episodes and profitably released in the USA and Europe. TV Guide called it “the cult of millions.”

The show had something for everyone. Children took it seriously as an exciting action-adventure, Teenagers enjoyed its hip, cool style, identifying with and idolising its heroes, and more mature viewers appreciated the tongue-in-cheek humour.

The show received 10,000 fan letters per week, and Vaughn and McCallum – clad in slick suits or trademark black turtlenecks –  were mobbed by crowds of teenagers as if they were rock stars. 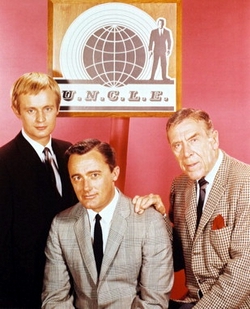 U.N.C.L.E. was also a huge merchandising success with images of the series’ stars and its distinctive logo appearing on hundreds of items, from bubble gum cards to a line of adult clothing.

In 1966, a spin-off series called The Girl From U.N.C.L.E. was created, starring Stephanie Powers as female agent April Dancer and Noel Harrison (son of Rex) as her British sidekick, Mark Slate.

The Girl From U.N.C.L.E. took its cue from the wild camp of the then-popular Batman series rather than from its parent show.

Although it featured many of the same elements of Man, including advanced spy-style weaponry and the super-secret HQ hidden behind an innocent tailor shop, Girl‘s plots were either absurdly implausible or downright silly and the series lasted only a year before being cancelled in 1967.

In 1983, Vaughn and McCallum reunited to play Solo and Kuryakin in a TV movie called Return of the Man From U.N.C.L.E. – The Fifteen Years Later Affair.

Robert Vaughn passed away in November 2016 after a battle with acute leukaemia. He was 83.

THRUSH was not an acronym and didn’t stand for anything, although a meaning was later invented for the UNCLE novels.