13-year-old Ian lives on Maotou – a remote and exotic island in the Pacific Ocean – with his seven-year-old sister Marina and their oceanographer uncle Patrick.

They meet and befriend an extremely intelligent white dolphin named ‘Zoom’ and encounter a series of exciting adventures together.

The animal cast in this animated series included several other animals including Raoul, Marina’s pet koala, a sloth called Phlegm (!), and a mynah bird called John-Sebastien, who could understand the dolphin language and the humans and so acted as a translator.

The original French version title was Oum le Dauphin Blanc. Released in Japan as Iruka to Shōnen. The character of ‘Oum’ the dolphin was also used for more than 30 years by Nestle in marketing for its ‘Galak’ white chocolate brand. 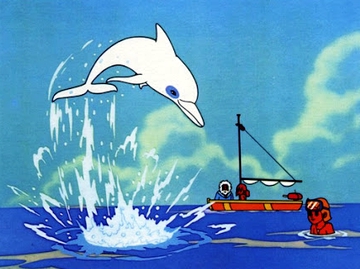 The series was revived in 2015, using computer-generated animation for a new set of 52 episodes.