The B-52’s formed in 1977 in Athens, Georgia. Kate Pierson had been playing in a folk protest band called The Sun Donuts while raising goats and tending her garden outside of Athens. Fred Schneider was studying forestry at the University of Georgia and working in a vegetarian restaurant called the Eldorado.

Ricky Wilson and Keith Strickland were working at the local bus station, which was managed by Strickland’s parents, and Cindy Wilson was making shakes at the Whirly-Q Lunchette. Collectively they were obsessed with 50’s dance crazes and really big hair (from whence they chose the band’s name), and they knew that rock fans needed music they could frug to . . .

The group made their debut at a house party on Valentine’s Day that year, then later went up to New York and dropped off a tape at the nightclub, Max’s Kansas City. The club liked their tape and The B-52’s made their debut in New York on 12 December 1977, in front of 17 people, including Kate’s future partner, artist Tim Rollins.

The B-52’s quickly became the toast of the New York club scene, perhaps because they had the nerve to wear Day-Glo when everyone else was dressed in angst-ridden shades of black.

As their popularity grew, a bidding war broke out among record labels. After signing with Warner Bros the band issued its self-titled first album in 1979. Recorded in the Bahamas under Island Records boss Chris Blackwell in just three weeks, the album became a New Wave classic on the strength of such songs as Rock Lobster, Planet Clare and Lava.

“I was at a disco that had pictures of lobsters and children playing ball,” Schneider recalled. “‘Rock Lobster’ sounded like a good title for a song.”

Their second album, Wild Planet (which included Private Idaho and Party Out Of Bounds) did even better, hitting #18 on the charts.

By this time the band had moved to a big house in Mahopac, New York, a little more than an hour north of Manhattan. But plucked out of the benign, anything-goes environment of Athens, they began to feel alienated, and their neighbours didn’t dig their communal lifestyle – or the fact that they rehearsed in their garage.

Musical tastes were also starting to change, and when their third album was delayed because producer David Byrne (Talking Heads) was preoccupied with his score for The Catherine Wheel, The B-52’s popularity began to wane. 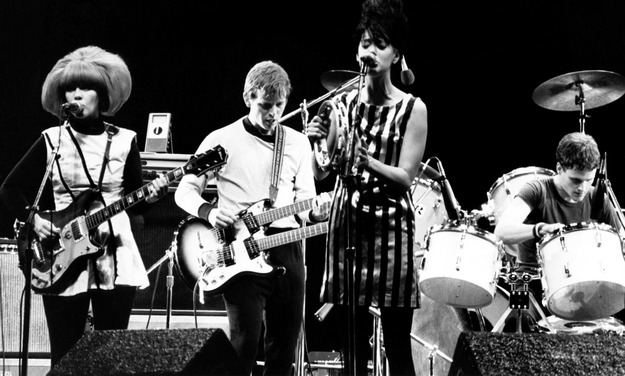 They released Party Mix to buy some time, but when Mesopotamia (the Byrne project) finally appeared, it was blasted by the critics and made it to only #35. Whammy (1983) didn’t fare much better, as the band floundered in the wake of MTV-friendly haircut bands, recycled riffs and unsuccessfully dabbled in drum machines and synthesizers.

Ricky Wilson passed away on 12 October 1985, aged 32. Wilson was first diagnosed as suffering from cancer of the lymph nodes a year earlier and had been undergoing treatment. He had confided the serious nature of his AIDS-related illness only to drummer Keith Strickland.

The other band members (including his younger sister) first learned of his illness when he entered the hospital three days before his death.

The members of the band were devastated. Keith Strickland had been Ricky’s best friend since their high school days in Athens, where they would don outrageous outfits and go to concerts in Atlanta together.

When Bouncing Off The Satellites was released, a year after Ricky’s death, it was greeted with an almost total lack of interest. Much of the album had been sampled and played on a Fairlight keyboard, giving it a cold, mechanical sound. But more importantly, The B-52’s seemed to be splintering – the full band had played on few of the tracks.

The album had been their most expensive to record, and with little royalty money coming in and no chance of a tour, the band fell into dire financial straits. They were forced to break into the pension fund they had set up, and Cindy and Keith had to sell the house they had bought in Manhattan. Pierson also had to sell her apartment.

While the band members saw each other socially, there was no talk of making music and the band seemed to have reached the end of the road.

Early in 1987 they decided to try and write a few songs together again. Ricky had always been the chief song-writer, so the remaining four found it difficult. Ricky had also been their guitarist, but rather than seek an external replacement, drummer Keith Strickland switched to guitar himself.

The band began work on the Cosmic Thing (1989) album, sequencing it like a movie, with the title track outlining the basic theme. Dry Country set the scene in the rural South, while the Motown-inspired Love Shackrecalled the juke joints where the B-52’s would dance to soul music until all hours.

With producers Nile Rodgers and Don Was on board, the band’s underexploited pop sensibility came to its most complete fruition. The B-52’s were back.