Leggy blonde private investigator Ginger McAllister (Cheri Caffaro) goes undercover to catch a gang – run by Rex Halsey (Duane Tucker) – who are blackmailing rich people and getting them hooked on drugs to boot. She is assisted by detective Jason Varone (William Grannel). 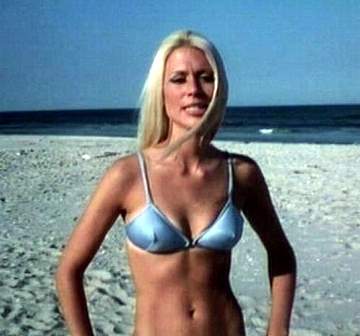 The acting is wobbly, the script is implausible, the plot is poor, the sets are cheap (a lot of it is clearly filmed in motel rooms) and the cinematography is dodgy – but this made-in-New-Jersey effort is 1970s sexploitation at its best.

Ginger’s secret weapon against the enemies of law and order lay in her readiness, at a moment’s notice, to take off all her clothes. Ginger castrates one man with piano wire in a hotel room. She shoots another. On both occasions, she subjects her helpless victims to cruel and inhuman punishment by cavorting around in front of them naked.

Director/writer Don Schain was so impressed with Cheri Caffaro that he cast her for a sequel, The Abductors (1972). They eventually married.