Paul Michael Glaser and David Soul were two of the coolest dudes in the 1970s. As were their alter egos Starsky and Hutch – detectives with the BCPD (the series was filmed around Los Angeles but the city was never named in the show). 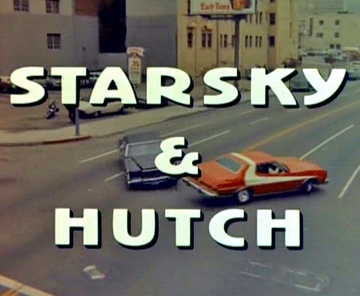 The two young plainclothes cops were both swinging bachelors, and their personalities meshed perfectly – they almost seemed to operate as one.

Dave Starsky was the streetwise member of the team, and Ken ‘Hutch’ Hutchinson the better-educated, softly spoken one.

Together they tackled cases in the roughest neighbourhood in town, full of pimps, muggers, dope pushers, and big-time hoods.

Although they often worked undercover they were usually highly visible, racing around the city, tires squealing, in Starsky’s bright red hot-rod. Who can forget that car? A bright red 1974 Ford Gran Torino with a white stripe across the roof and down the sides, tapering to a point at the front. Damn, that’s stylish!

Captain Harold Dobey was their quick-tempered, long-suffering but understanding boss, and Huggy Bear their flamboyant informant.

The show was produced by Aaron Spelling and ran for three seasons, ending with Starsky laying in a hospital bed, critically wounded.

It was originally planned that Starsky would die in the final episode but Spelling decided it was too sad and too final and decided to let him pull through in the end. Meanwhile, Hutch was enjoying a successful pop career – David Soul had a hit record with Don’t Give Up On Us Baby.

A curious undercurrent to the show was suggested by editor Horace Newcomb in his book, the Museum of Broadcast Communications’ Encyclopaedia of Television.

Newcomb maintains that between the ever-present unspoken communication, the frequent hugging, tackling and horseplay, the undercover cross-dressing and the tendency of all the boys’ lady friends to cause jealous fits and sulky drinking, it’s apparent the detectives are more than just partners (not that there’s anything wrong with that). Check out the re-runs and decide for yourself.

After the demise of Starsky and Hutch, David Soul grabbed headlines with a lifestyle fuelled by booze and strife. He married and divorced four times and was jailed for beating one of his wives.

Soul sought counselling and curbed his drinking, then revived his career: singing, acting on television and stage, and directing in London after he emigrated to the UK in the mid-90s and becoming a British citizen.

Planet Of The Apes