Too Close For Comfort

Based on the British series Keep It In The Family, this ABC series presented the comedic exploits of San Francisco cartoonist Henry Rush (Mary Tyler Moore Show veteran Ted Knight) and his family.

Henry and his wife Muriel (Nancy Dussault) owned a red Victorian house on Buena Vista Street in San Francisco, which was once a famous brothel. 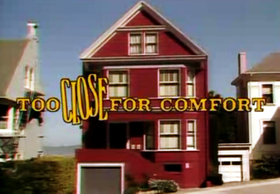 The overprotective parents now lived in an apartment directly above their two young daughters – hence the title. In order to keep tabs on his daughters, Henry rented them the downstairs apartment for $300 a month.

Henry was the creator and artist of the comic strip Cosmic Cow (a space crime fighter) – his biggest challenge was “to draw an udder so it is not offensive” – which was published by Random Comics, a division of Wainwright Publishing.

Muriel was a freelance photographer. Before marrying Henry, she
was Muriel Martin, a singer with Al Crowler and His Orchestra.

Older daughter Jacqueline, nicknamed Jackie (Deborah Van Valkenburgh), was first a teller at the Bay City Bank, then a salesgirl at Balaban’s Department Store and finally a fashion designer.

Sarah (Lydia Cornell), a freshman at San Francisco State College, took various part-time jobs to earn her half of the rent money. Her first job was as a ‘wench waitress’ at the Fox and Hound Bar (she got the job because she had a figure that fit the available uniform).

She then became a teller at Jackie’s bank, the local weather forecaster for KTSF-TV’s Dawn in San Francisco program and a businesswoman who attempted to market Cosmic Cow Cookies. 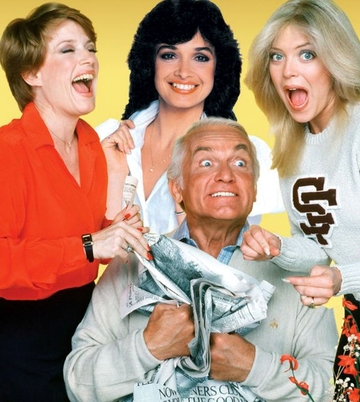 The wacky Monroe Ficus (Jim J Bullock) was originally a friend of Sarah’s who attended State College and sort of just attached himself to her.

His major was communications, with a minor in journalism; he later became a security guard at the Riverwood Shopping Mall.

Henry’s niece, April (Deena Freeman), appeared for one season and was a free-spirited musician who hung out with a character named Moonbeam.

Production was cancelled after 63 episodes by ABC but carried on in Syndication for almost a hundred more episodes.

In 1986 the show was retitled The Ted Knight Show when Henry and his wife minus the kids moved to Mill Valley in Marin County, California when Henry became co-owner of local newspaper, The Marin Bugler with Hope Stinson.

Monroe was now Henry’s assistant at the paper, but hoped to become a standup comic and performs as Buddy Ficus at the Comedy Shack.

The show ceased production in 1986 after Ted Knight lost his battle with cancer and passed away.